Since 2012
Math 24 Abroad: Ecuador
We donated decks of Math 24 cards to Shree Swet Ganesh Secondary School in Nepal (read more at the bottom of this page). In addition to the donation of these cards, our board members provided instruction and arranged competitions that fortified these students' math skills and gave them more than a little enthusiasm to study. Now we have extended the program to a school in Machachi, Ecuador.


Holly and some students from the sixth grade practice Math 24.

Much like in Nepal, Amy and Holly saw the incredible impact of this game on the Ecuadorian children's math skills. Through the universal language of mathematics, they taught and provided these cards and other school supplies donated by the foundation to Segundo Miguel Salazar Primary School. The school, situated at about 9,000 ft elevation and surrounded by volcanoes and agricultural fields, serves about one hundred kids from grades 1-7.

Students work to figure out a Math 24 card in an in-class competition.

"The students were so happy and grateful to have this game," Holly said. "They were so excited to figure the cards out that they would even be working on them during recess." In foreign countries where math education is often taught through rote memorization, Math 24 is a revolutionary tool. Not only is it fun and interactive for students, it improves their math skills tremendously.

Students at Samata Shiksaya Niketan School (the same school at which the foundation is currentlysponsoring an art teacher) were overjoyed to be planting trees at their school last Thursday. Students, teachers, and volunteers all worked together to plant 120 trees which were sponsored by the Shauna Rose Kaufman Foundation. The saplings brighten the school's environment, and, in time, will give precious shade for students to work and play under. Though the cost of purchasing the trees from a local nursery was not great, the school never could have afforded it on their own. Now the students will care for the many different kinds of trees which were planted, including several guava tree saplings, and watch as the trees grow and develop.

Ram Krishna Sahi, a local Nepali activist, as well as an advisory board member of the foundation, contacted a local nursery in Nepal to obtain the trees that the students at Samata Niketan planted on August 11th. The students planted the trees in recycled feed stacks because their school is on rented land, and should they be forced to move, the trees could come with them.

We hope that these beautiful young trees will grow up strong and healthy like the students who planted them.

The sound of rain on a tin roof seems to drown out all other sounds, but a class of eager students in rural Nepal is unfazed by the noise. They scribble excitedly on worn notebooks and scraps of paper until finally, the smallest of them all calls out, "chaubis!" This is the Nepali word for 24.

This is a scene of students playing Math 24 at a public or 'government' school in Chaukot, Nepal. The students at this school are left to attend here while the other children in their village go to private schools and learn from well-trained teachers with proper textbooks. The conditions these poor students endure does nothing to dampen their spirits, however.

The donation of two decks of Math 24 cards was cause for much excitement at Shree Swet Ganesh Lower Secondary School, which has held two Math 24 Competitions since the donation of the cards in April. Board members Amy and Holly Kaufman, who were working as volunteer teachers at the school, instructed the students on how to play the game.

While the students were extremely enthusiastic at the beginning of instruction, their mental math skills were almost non-existent. Even eighth grade students did simple addition by counting on their fingers. In a month's time, these students' math skills had improved beyond recognition.

In middle and elementary school, Shauna and her sister Holly loved to play and compete in a game called Math 24. This card game reinforces Math skills and teaches "mental Math" as students calculate how four different numbers can be added, subtracted, multiplied, and divided to equal 24. This kind of mental math is often overlooked and undervalued when students can use written math and calculators. Shauna competed in the DE state Math 24 competition making it to the semi-finals round. Her mother, Amy, helped to run an after school program and served as a proctor for the competition.

Shree Swet Ganesh has also gotten on the art bandwagon and held its first art competition with art supplies donated to the school by the Foundation. Special thanks to Indra Manandhar, the school's English teacher for organizing the competition.

Rameshwor Archaya, the school's Math teacher, has now written to us to say he plans to hold an inter-school Math 24 competition.

We really need help for all of our projects but a small donation can make a big difference in Nepal. Please go to the Home page and donate!


Supporting schools around the world. We are currently working to rebuild schools damaged by the 2015 earthquake in Nepal. 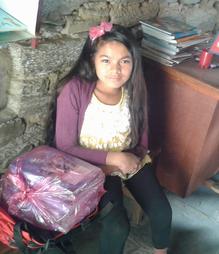 The school year in Nepal begins in April. Sunita Tamang from the earthquake stricken area of Sindhulpachowk starts her first full school year. With help from Advisory Board member, Sushil Adhikari and Bright Star Society, Sunita couldn't go to school because the school was uphill. A wheelchair donated by SRKF and the dedication of her mother who pushes Sunita's wheelchair  both ways each day, Sunita is doing well in school. We are all so proud of her accomplishment!

Academic Challenge Award
The Foundation has been honored by the creation of an award in Shauna's memory. The award will be given annually to a student of the Academic Challenge program who exhibits commitment to help others, community dedication, volunteering, and exploring ways to make a change. Shauna participated in this advanced academic program held at Delaware Technical and Community College from 2004-2009 and was well-known for her participation in the Creativity Team.

The award recipient is chosen by Academic Challenge staff and teachers. 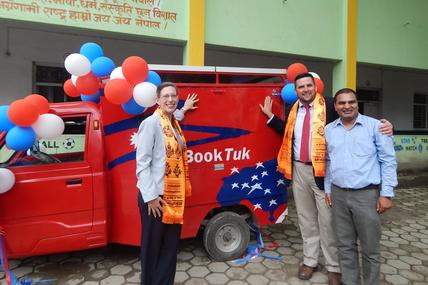