--students who speak different languages use Art to connect to the world.

​
See the Coastal Point article about our project here!

A sister school relationship means linking two schools in a unique partnership that involves communication between students. In the case of this sister school, the students will communicate through... art! Since students in Nepal speak limited English, it is impractical to communicate with letters. And if pictures really do say a thousand words, exchanging artwork is a wonderful way to bridge this gap, and share about one another's country and school.

At Lord Baltimore Elementary, Amy and Holly gave presentations to fourth grade students about Nepal, Nepali culture, and their new sister school, called Samata School for short. None of the students knew where Nepal was! But after the presentation, they learned not only its location, but hundreds of facts about Nepal's language, culture, and lifestyle. The presentation shared photos of Samata School's grounds, as well as its students and teachers. The kids at LB were surprised but sympathetic to learn of the lack of resources at their sister school. But they were also very impressed by the artwork of the Samata School's students, which was decidedly neater than that of most LB students.

This project is really a beautiful way for students on opposite ends of the Earth to share about themselves and their common humanity, through the medium of artwork.

​Maiya Goes to the Bamboo School

Student illustrations chosen through an annual art competition hosted by SRKF are used to illustrate the book, Maiya Goes to the Bamboo School that celebrates the importance of education and triumph over adversity.

Truly, the students who receive art class via the foundation never seem to get bored. In the midst of difficult classes like English language, mathematics, and the complex grammar of their own language, Nepali, the kids always welcome the time they have to nurture their creative side and improve their skills.

Nepal has a very unique and beautiful culture. We, in America, are likely to think of Nepalis under one umbrella: that of their nation. But Nepalis are also divided into a number of ethnic groups such as Chhetri, Newar, Tamang, Thami, Limbu, and many others. Bhaktapur, where we hired the first art teacher, is a city of traditional Newar artisans. For may hundreds of years Newars have been renowned for their skills in woodcarving and pottery. Newar people make up roughly 10% of Nepalis, but they are concentrated in the Kathmandu Valley, or Bhaktapur area. In that city, it is not uncommon to find older people who do not even speak the national language, Nepali, but only their native tongue Newari.

So as it happens, a large number of students at the Bhaktapur school are Newari. There is usually no animosity between ethnic groups (only intermarriage is taboo), so the students of other backgrounds were also motivated in making the latest drawing for a recent art competition held at the school.

In this drawing, you can see some of the characteristics of Newar people:

On the girl:
Red and black cloth tied in folds

tika (red mark on forehead that represents the third eye)

and ornaments in the hair.

The boy wears Newar traditional dress as well: a vest, pants, and 'topi' hat. You'll notice he also has a flower in his hair. Traditionally, for all Hindus, flowers are placed on the head after worship. Newari men, more often than girls, can be seen with poinsettias peaking out under their caps.

Shauna with her artwork at the 2009 Young At Art show in Rehoboth Beach, Delaware.

"Art is a very powerful force and I feel that it is a common thread between many cultures and races throughout the world."
- Shauna Kaufman 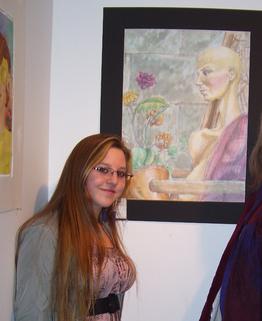 We believe art is an integral part of life. Can you imagine life without art? From simple childhood sketches to carved mosques to lifelike portraits... in every country and every life, art is the medium by which we create meaning.

With this in mind, we seek to share art throughout the world. We provide artwork materials for those who lack them, art education for those who are denied it, and inspiration from one artist through another, across national border.

Art Classes at the Bamboo School since 2011!

That's 8 years and running -- we have staying power!

We initiated Art classes for at-risk children at the Bamboo School in Bhaktapur, Nepal in 2011 and the program is still going strong thanks to our long time teacher, Durga Sir.  Weekly art classes give students strong skills in spatial perception and an outlet for creativity. Combing art with themes, such as Mental Health Awareness Month and Meditation, gives students projects they will long remember and incorporate into their lives. 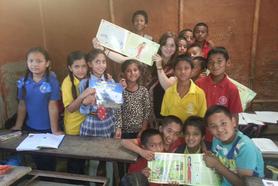 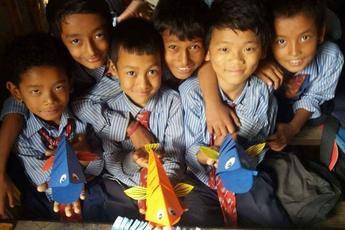 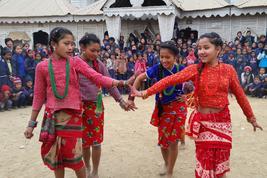 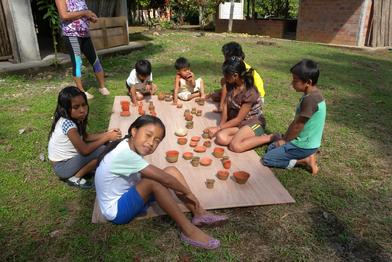 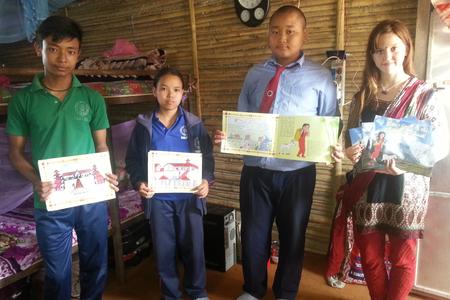 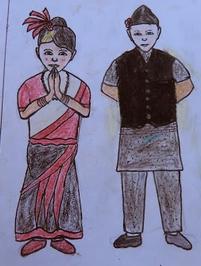 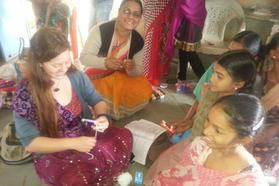 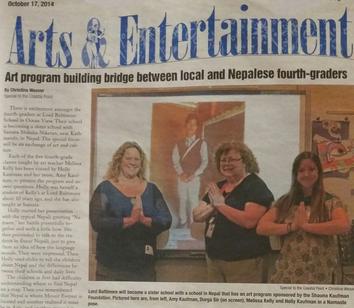 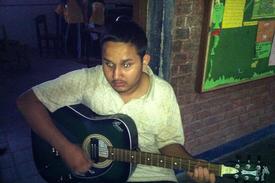 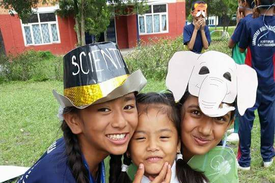 On February 6th, Amy and Holly returned from a three week trip to Ecuador where they brought art supplies, educational games, and their teaching expertise to Segundo Miguel Salazar Primary School on behalf of the Foundation.  Third Graders at Segundo Miguel Salazar show off their "god's eyes", an art project from Mexico.

The Foundation donated art supplies including yarn, scissors, paper, and other craft materials as well as Math 24 cards and bilingual children's books to this small school in Machachi, Ecuador. Read more under the Education tab.

Since August, the foundation has been funding an art teacher at Samata Shiksaya Niketan in Nepal. In addition to overseeing the art teacher and providing much-necessary cultural perspective on the Shana Kala program, Ram Krishna has recently sent us some beautiful photos of the children and their artwork, including their recycled paper house project: which is a process of harvesting the natural materials as well as the knowledge of how to craft the finished project.

In Ecuador, Amada, a Quichua woman with long black hair and talent for remembering and recounting the old stories that have been passed down through generations in her family. After years of practice, Amada has become a skilled and esteemed potter, crafting beautiful hand painted bowls as well as vessels in the shape of the spirits and animals of the Quichua legends.

When we met Amada, she was delighted and proud to come to Kuyu Urcu and share her knowledge with a group of students over a three day period. Amada has provided lessons before for Quichuas and foreignors before, and was happy to cut her fees in half and stay many extra hours helping the children learn her craft. The children of Quichua origin were able to connect to their history thereby keeping arts alive within their communities.